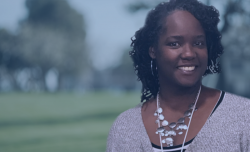 Raised in a Christian home with a grandfather who pastored a church, Ursula’s life was going well until her mother died of breast cancer just a month before Ursula’s 16th birthday.

She married and had a son. But the relationship was a “toxic” one in which she and her husband were both using drugs.

“Some people can change with just modest redirection,” she says. “I have to have a big old billboard sign with flashing bulbs to get my attention.” That “billboard” showed up the night her husband and son got into an argument over $20.

Ursula left and began walking to get away from the fighting. The next thing she knew, her husband pulled up in the car and threw all her clothes on the ground. “I had been wanting to leave”, she says. “But I had no resources. No job.”

Ursula called different places to get help, and Shelter KC was the last call she made.

“I truly believe God brought me here because I didn’t have the courage to do it for myself.”

Thanks to your support, Ursula was given a chance to start over at our Women’s Center. “It is awesome how God works. The resources and the staff just build me up...they have lovingly invested in my life! I feel like God is just building this wave of support around me.”

Today, Ursula’s goal is to have a home and be financially stable. “When I came in, I was destitute and broken. I had turned my back on God. Today, they tell me I am worthy. Nobody ever said that to me before. This is the most loving environment I could hope for.”

Thank you for helping Ursula heal through your prayers and support!

Donate to help us provide love and care to people like Ursula!